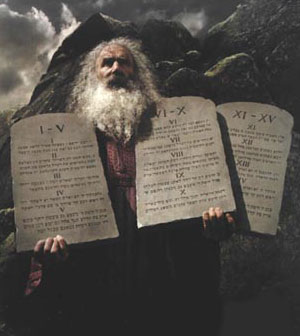 St. Paul wanted to convince the Galatians not to get circumcised, which you would think wouldn’t be that hard to do. Just a simple diagram is all it would take, with big letters at the top: “Really?!?” Controversy over! In what must be historical evidence that Paul was not good at illustrations, he gives an argument about how the law works: getting circumcised obligates you to keeping the whole law.

It’s a principle that St. James also used when he said that keeping the whole law in all but one point isn’t good enough, because you’re still guilty of breaking the whole thing. That kind of agreement between Paul and James would be enough to make Martin Luther pee his monk-robe (if it’s okay to make nerdy-historical-theology-slash-junior-high-toilet-humor jokes here).

You have heard that it was said, use this verse to convince people that they need to be perfect to go to heaven. And if they have done even one thing wrong, then they’re completely guilty murderous lawbreakers. Once you have them feeling sick, then you sell them the cure. Accept Jesus, and you’ll get to go to heaven. You’ll be saved from the situation in which you have to keep the whole law and be perfect. You have to get them to feel stuck at the only problem we’ve been told the gospel solves: moral guilt.

But I say to you, that’s not what Paul and James are talking about. They both cite a basic principle about how law works (keep the whole thing, or you break the whole thing), but use it for different purposes. Paul is addressing Galatians who are confused about how to follow Christ, but are so intent on trying that they are willing to undergo circumcision if that’s what it takes. Immature and spiritually disastrous? Sure. But the willingness to endure pain in order to become more like Christ is something we could use a little more of today. Paul’s argument about keeping the whole law is meant to expose the Judiazers as manipulative door to door salesmen, using the foot-in-the-door technique to slowly win over sincere believers. Paul’s advice: Don’t cut yourself off from Christ, but follow his law, which is love. It is not an evangelism strategy. It is a critical discipleship decision.

Similarly, James writes to disciples, but his readers have swallowed the opposite lie that Christ frees them from having to do anything at all. So where Paul wants to keep the Galatians from exchanging the new law for the old one, James wants to remind us that it was an exchange, which means we are not law-less. James takes it one step further: Whether you’re talking about the old law or the new one, the principle still holds that you either keep the whole law or break the whole law. That’s just the way a law works.

So what does that mean when the law is (as Paul and James both agree) “love your neighbor as yourself”? Never be unloving? Well, that would be great, but we’re not going to be perfect. So does that mean that if I am unloving just one time, I’m out? That’s not what James means; he’s talking about partiality, favoritism, and especially preferring the rich over the poor. Breaking the law of love happens when there is a person or category of persons who are excluded from receiving our love. Keeping the law of love at every point means that we show love to every kind of person.

That’s what it means to keep the whole law. Jesus told us to be perfect as our Father in heaven is perfect. How is our Father perfect? He sends the sun to rise on the evil and the good, and sends the rain to water the just and the unjust. Deserving does not secure provision, love does. There is no kind of person excluded from receiving his love.

There can be no person and no category of people who are excluded from our self-giving love. If one can be found, we are unloving law breakers because we did not keep the whole law. Do only the rich find a place in our churches? Do only the good find their way into our homes for dinner? Do only those who are like us find friendship and belonging? Then we have received our reward already, and we are no different from anyone else.

← Another One Bites the Dust
Spiritual Asceticism →