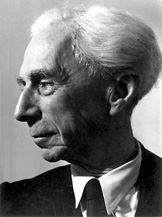 Bertrand Russell was a 20th Century English philosopher. He wrote the essay “Why I Am Not a Christian,” which, along with other essays, was later published as a book critiquing religion. The quote below is from an essay titled “On Youthful Cynicism” from his book The Will to Doubt.

“They [believers] are not nearly so sure that this world was created for the glory of God as they are that God is a useful hypothesis for improving this world. By subordinating God to the needs of this sublunary life, they cast suspicion on the genuineness of their faith. They seem to think that God, like the Sabbath, was made for man.”