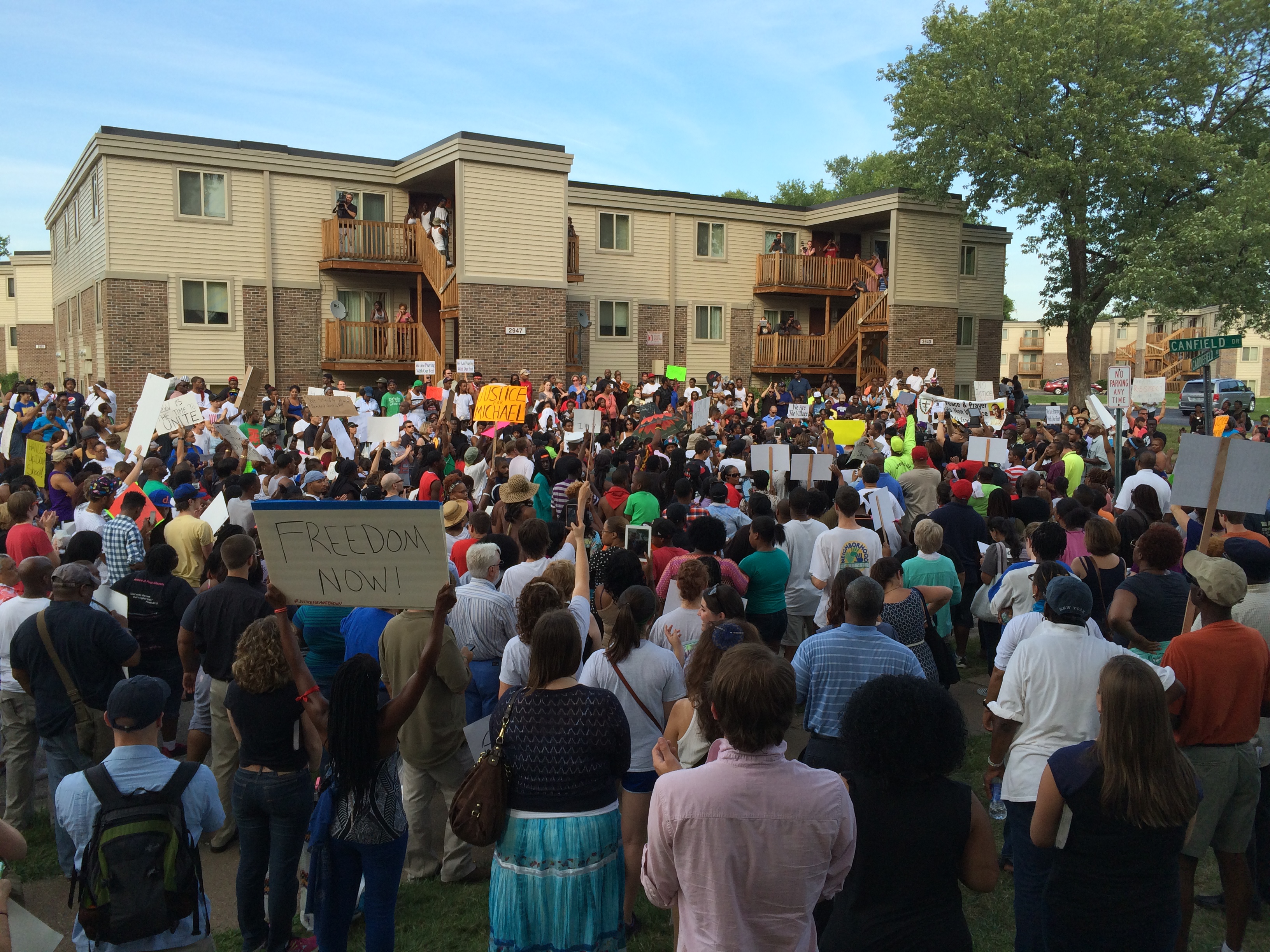 What I Saw in Ferguson

I felt a new fear when six or seven police cruisers with lights and sirens on pulled quickly into the vacant commercial lot where our march was getting organized. I have felt nervous about getting a ticket before, but this was different. I wondered if it was a mistake to have come to Ferguson that Thursday evening after three nights of tear gas and looting and SWAT teams and streets flooded with anger.

A Latina friend once got pulled over by police while I was in the passenger seat. I had never seen my friend like this before. She quickly got out her license and registration and held one in each shaking hand atop the steering wheel. She suggested that I put my hands on the dashboard. I looked behind us at the flashing lights and then at her, completely bewildered. She seemed terrified. I couldn’t understand it, but that didn’t make it irrational. It only showed me how far apart our experiences were to produce such a visceral fear in her while I was merely irritated that we were going to be late.

Last Thursday evening I felt the fear myself. I didn’t know what was going to happen when officers from multiple departments intermingled with the crowd. Capt. Johnson, now well known as the man in command of the second wave of police response to unrest in Ferguson, stood quietly next to me. 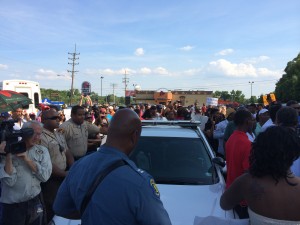 The march was organized by the St. Louis Clergy Coalition and the crowd was mostly black, somewhat older than I expected, and composed of more women than I anticipated. As someone took to a bullhorn to announce instructions, another crowd marched into the parking lot. They were almost entirely young black men, they were led in their chanting by a man with a bullhorn, and they were angry. The police were stern but composed as the two crowds became one.

After a couple minutes, the clergy leaders called for order and the chanting subsided. They declared the march a nonviolent protest, invoked Dr. Martin Luther King Jr., and gave a few basic instructions about not being reactive or disorderly. They welcomed the police and the crowd cheered, many reaching out to shake hands with a police officer.

Capt. Johnson was invited to speak and taking the bullhorn he talked about his connection to the area and to some of the pastors leading the march. He said he and the other officers would be marching with us, that we were free to say or shout whatever we needed to, and that he was willing to stay up all night with us. 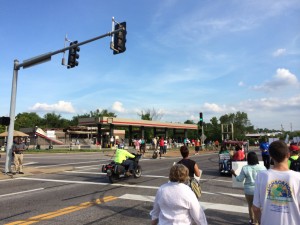 The atmosphere was almost festive as we walked into Ferguson, past the burned out QT, and into the housing complex where Mike Brown was killed. There the mood turned more somber as four or five spoke briefly to the crowd. The first speaker set the tone as she said, “We are here in a spirit of repentance,” and apologized for the church’s lack of involvement in the lives of youth in the city. “We expected you to come into the church instead of bringing the church to you,” she said. “Don’t blame God for that; blame us.” 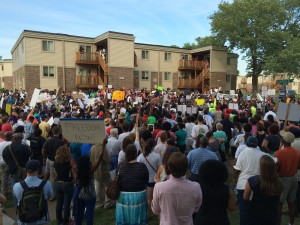 On the way back out of the neighborhood we stopped at the QT to rest, greet one another, and share our feelings of relief that something had been achieved. An older pastor near me was almost in tears as he said, “St. Louis has never had anything like this before. Never. Things are going to be different now.”

I stood awkwardly at the QT (as I always do in crowds, actually) until I heard someone ask, “Is that my new friend?” It was Del, a middle aged black woman I had met in the parking lot at the beginning of the march. We hugged and talked about our common hope for peace.

I felt like the march accomplished something after days of looting and disproportionate police response. We proved, if only for a fleeting moment, that it was possible to be a “we.” What is at stake in Ferguson is not only the details of what happened between Mike Brown and Darrell Wilson, and not only the conflicts between protesters and police.

What is at stake is whether or not “we” means anything expansive and inclusive anymore, or only narrow, exclusive, and closed. It will be decided not only on the streets of Ferguson, and not only in the media, but also in each of our lives. I am grieved at the shocking number of people who destroy “we” in favor of “us and them.”

And now some thoughts on questions I’ve been asked (and some I haven’t):

Was I taking sides? No. And yes. I see no need to rush to judgment, especially in a culture that travels so swiftly from opinion to conclusion to condemnation. I went because the St. Louis Clergy Coalition invited clergy to come and specified that this was to be a march for peace and justice. I went to be for rather than against. I went to take everyone’s side.

I didn’t go because I thought Mike Brown was innocent, and I didn’t go because I thought Darrell Wilson was innocent. So later revelations (the stolen cigars, the six shots, and anything else that might come out) don’t change anything for me. Innocence is not a precondition for solidarity. Jesus came to walk among us not in spite of our guilt but because of it, and anyone who wants to be his disciple must walk as Jesus walked. An aversion to guilt, so common in the church, is not Christlike.

So why go? What good will a march do? What’s the point? The point is confession, which is not so much about guilt as it is about truth. Confession is just surrender to the truth. And confession can be a community practice, not just an individual one. Marches were one of the primary methods for social change that Dr. Martin Luther King Jr. used because they could focus attention on an important issue or injustice. A march is a way of telling society to pay attention, of forcing the issue, of bringing something hidden into the light. The light disturbs the haunts of the wicked and stops the arm that is raised in violence. I marched because I believe the light of truth has incredible power to disarm. Confession overpowers guilt. It would be hard to be a Christian without believing that.

Am I dismayed that violence has returned? Yes. I am deeply grieved. But I am not surprised. Our capacity to destroy is stronger than our capacity to create. But creation participates in God in a way that destruction does not, so I do not lose hope.

In the midst of the violence, two distinctions are helpful. First, just because something is understandable does not make it excusable. Looting can be understandable (it is) even though it’s not excusable (it isn’t). Disproportionate police responses are the same. For white folks in particular, there is no need to ignore the reality of racism, the socioeconomic forces at work in our country, and the desperation and hopelessness all of that can bring just because this week it has given birth to violence. To say it brings to the surface important truths is not the same as saying it is justifiable.

Second, the violence does not show us “who they really are” (however you would define “they”). “I am innocent and they are guilty. You can just see it in what they do. I knew it would come out sooner or later.” The violence is the exception, the anomaly, the dangerous mutation. Those who embrace violence are not themselves. Every temptation begins, “If you are the child of God,” and ends in the destruction of that identity. I resist the power of evil by insisting on the humanity of those caught in it, whether oppressors or oppressed. I have no enemies; there is only we.

So what now? Fast and pray, of course. By fasting I enter into the grief, the mourning, the loss, the anguish, and the repentance. By praying I beg God to open the prison door and release us from our bondage to sin. I pray also to the Lord of the harvest to send out workers to the people who are like sheep without a shepherd. The pastors did an amazing job last Thursday leading the march, and I think that’s one of the reasons why that day was different from every other day we’ve seen. Pray for leaders. Pray for enemies. Pray for truth. Pray for your own heart and mouth to be united in love. If we’re not willing to fast and pray, we’re not yet willing to embrace a truly Christian response to Ferguson.

← On Depression and Brokenness
Dr. King on Marching →