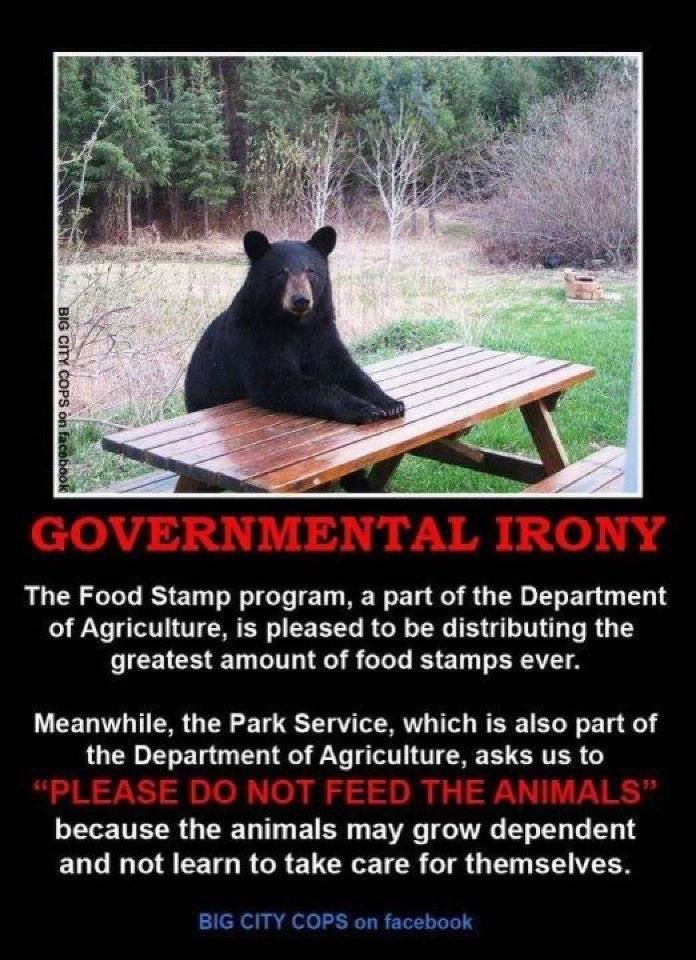 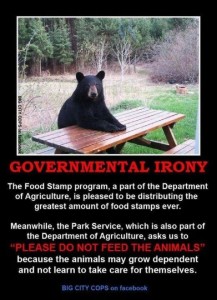 This image is probably offensive to lots of people. I know it is to me. The most offensive thing about it is that this is not actually an example of irony. Here at The Ironic Disciple we’re pretty protective of irony, which is about the discrepancy between appearance and reality, such as a contradiction between what is stated and what is actually meant.

Okay, so if this isn’t irony, then what is it? It’s perhaps a contradiction between reality and what should be (according to the creator of the poster). There is an unexpected turn at the end, which is like irony, but not quite there from a literary perspective.

The creator of the image carefully used parallelism to show the situations are equivalent. For instance, the “Food Stamp” and “Park Service” are both capitalized, both are run by the same government agency, and some variation of the word ‘please’ appears in both. You might be thinking I’m reading into this, but consider what had to be overlooked to make these two situations equivalent. First, it is unnecessary to capitalize “food stamp” since that’s not actually the official name of the program. Second, and even more importantly, the Park Service is not a part of the Department of Agriculture–it’s in the Department of the Interior. The comparison would be weakened by this correction, as it would be much easier to imagine two separate government agencies acting independently of one another.

What makes these two cases so different? The poor are not animals, they are people.

Granted, the poster does not come right out and say that the poor are animals–not many would nod in approval if it did. But in arguing that poor people and animals should be treated similarly, at least some similarity has to be assumed. But for those who hold that there is an immeasurable difference between people–poor or not–and animals, there is absolutely no irony at all in the government responding to them differently. This is, in fact, exactly what we would expect! It would be unjust for the government to treat the poor as animals.

In this way, the argument in the poster actually violates its own assumed definition of justice. I guess there is some irony here after all!

The concern over social programs creating dependency and stealing human dignity is valid. But you don’t stand up for human dignity by dehumanizing people. The poster seems to advocate for the best interest of the poor, but actually demeans them in the process. Irony number two.

It also fails to recognize that if an animal dies of starvation, that might be be tragic in some sense, but it doesn’t rise to the level of a government obligation to keep it from happening. Are we really supposed to believe that the government also has no obligation to keep people from starving? Is our message to the government about food stamps really supposed to be summed up by the line, “PLEASE DO NOT FEED THE ANIMALS”?

There are probably thousands of valid ways to discuss the plight of the poor, the obligations of the government in caring for the poor, the effectiveness of social programs to confront the true causes of poverty, the difference between relief and development, the dangers and mechanisms of dependence, and on and on. But one thing is for sure: This is definitely not one of those valid ways to engage the issue.

This is why I am not looking forward to the rest of this election year. I am afraid it’s only going to get worse and worse. We don’t listen to each other. We don’t assume value, intelligence, love, goodness, etc. in our political opponents. In short, we de-humanize them by assuming they are deprived of basic human capacities. We are encouraged to be fearful and angry, but we don’t pause to consider that this will make us easier to control.

I guess the advice I’m giving is this: Don’t react out of fear and anger. Fear and anger can rob us of our agency, our ability to respond to our circumstances in a healthy and effective way. The temper of our political rhetoric can tend to dehumanize those who participate. Don’t turn other people into animals. And don’t let yourself be dehumanized in the process.

More succinctly: “Love your neighbor as yourself” applies this year and every year, in politics as in the rest of life. Be obedient.

← A Litany
The Rest of the Story →