So How Was the March? 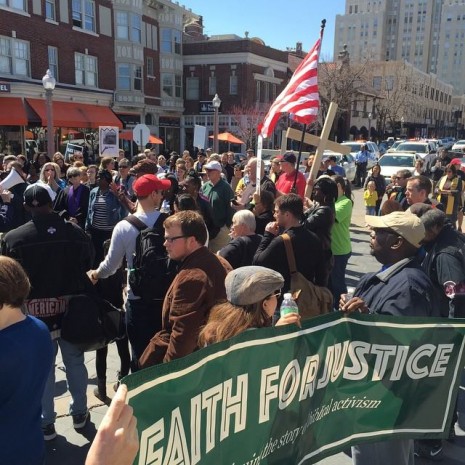 God works so slowly that he seems irresponsibly patient. When rain falls from the sky it’s almost as if God intends it to bless the righteous and the unrighteous alike. And when the sun rises, both the godly and the godless receive its benefit. God could speed things along; even I can see that, so I assume God can too. But God is unhurried, unbothered, and undeterred by my impatient foot-tapping as I gesture toward a world on the brink of chaos.

To be God must at least mean not to fret.

Sometimes, though, the hand of God works so quickly your eye could never catch it. By the time you see it, it’s already done, as if God created it as a memory. Suddenly what you’ve waited for is there behind you.

The resurrection was like that. The people of God had waited millennia for the Messiah, and at long last he came suddenly. On Good Friday his execution was slow and torturous and his body hung dead for hours in full view of any who passed by. On Holy Saturday minute after minute and hour after hour passed as hope decayed into had-hoped.

Then suddenly resurrection had happened. It was already done and no one had been able to see it. Peter and John raced to the tomb as fast as they could, but they were altogether too slow. They were already living in a new reality and didn’t notice.

How I wish God would always work too fast rather than too slow. And how I wish I could work like that as well, that no sooner do I turn my attention to a task than it’s already done.

But mostly God still goes at my pace. I want to preach the one sermon that changes everything, but my words don’t put flesh on dry bones—they barely seem to stir sleepy faces. And God smiles. I want my plans to bring about the rebirth of a city and the revival of the church, but mostly I just tend a few tender shoots in a bare patch of ground and look up at God confused. But God smiles.

I want to march a couple miles and see justice show up at the end. I want to march out of the valley of the shadow of death into the bright daybreak of kingdom come. And actually if we could get there in a mile and a half, that would be even better because the ham needs to go in the oven soon. In my peripheral vision I see someone’s taking a picture of me, radiant in the splendor of spring sunshine, striding toward justice with a smile. But next to me a woman is providing the backdrop, carrying an American flag that is bright and alive and flying upside down. And God laughs.

How ridiculous I am, and how patiently and slowly God must walk for me to keep up. God’s taking his time, strolling along with his children as we pretend we’re conquering the world. Often I’m frustrated by how God’s never in a hurry. This morning at least it feels gracious and I feel invited to share in the confidence of a God who does not worry. And I feel a renewed sense that love often means going at the pace of the other unhurried and unbothered.

That was my sense of the Mourning March. We’re not all in the same place, but we can walk together patiently until suddenly we are. And God will smile.

← Marching for the Guilty
Jesus Got Shot for You: The Gospel in Contemporary Images (or An Extended Allusion to Romans 1-8) →